Queen’s Birthday weekend saw the arrival in Dunedin of 220 masters rowers and supporters, mainly from the South Island but some from the North.

The South Island Masters Regatta has run for two decades and always at Queen’s Birthday weekend.  The first regatta was held at Port Chalmers, but has enjoyed significant growth since then. The regatta rotates around the South Island clubs, with the last two regattas, planned by Ashburton/CURE, being cancelled due to the COVID pandemic in 2020 and the 2021 floods.  Wakatipu held a successful regatta in 2019 on Lake Wakatipu and Lake Hayes.

Rowing in June, in Dunedin, is not for the faint-hearted and organisers were pleased with the excellent response.

As many masters rowers coach over summer, and the calendar is full, this weekend is an opportunity to race and enjoy some social time over the long weekend. We anticipated a frosty start, with associated calm water, and in fact we enjoyed perfect rowing conditions.

Saturday saw the long distance race on the Taieri River, known as the Taieri–upon-Henley Bridge-to-Bridge, over 8.5 kilometres.  That’s 8.5 kilometres to the start and a race of 8.5 kilometres back, again, not for the pusillanimous. Chosen for the scenery, the quiet water and surrounds, plus the proximity to Lake Waihola, it is described as one of the best rowing routes in New Zealand. A bonus was the ability to beach boats at the Taieri Mouth end, before the race proper.  Onlookers at the Taieri Mouth Bridge enjoyed a spectacle as the sun glistened on the water and the many crews in different club colours wove their way down the river.

The strategy of taking the shortest distance was challenged along the twisting river, however the scenic course offered a novelty for rowers.  With 32 crews entered in a variety of boats, and leaving at one-minute intervals, crews jostled to contest some coveted trophies including the “Mock Rooster” and “Port Parrot”.

The crack Picton crew finished fastest in 32 minutes 44 seconds, taking home the Bluebridge Trophy. Dan Karena, along with three Gaudin brothers – Keiran, Ryan and Hayden – took the race by the scruff of the neck, putting time into the favoured eights.

Picton carried this through to Sunday where they were winners of A and B single and double sculls, B pair, B 4- and 4x and combined in the 8+.  Their enthusiasm has extended to volunteering to host the 2023 event – mark your calendars.

Winner of the Port Parrot for fastest women’s quad was North End.

In a nod to the Coast-to-Coast, all competitors finishing the long distance race were given a can of Emerson’s newest product.

Sunday racing over 1000 metres on Lake Waihola was generally very close.  Several trophies for overall honours were at stake, meaning handicaps needed to be applied to all events in each class throughout the day to negate the ageing effect – i.e. results of A-D races had to be matched against E-I races and handicaps applied to reveal the eventual “fastest” winner.  This also ensured crews didn’t ease up and was effectively a “sealed handicap”.

Starting with mixed races at 9am, the fixtures moved to 5-year age group events and finished with the feature eights at 3pm. With many race classes available, there was a fair bit of boat-hopping and some quick turnarounds.

The women’s eight was won by North End/Invercargill and the men’s eight Wakatipu/North End.

Dave Hanan, North End, was again awarded “Stew’s Stirrer”.   Dave towed the club boats from the closest club but still managed to arrive just in the nick of time.  However, on arrival he realised he had left oars at home, but thought he could make the 1.5 hour round trip in less than half an hour.

The Mercer Trophy, for the club with the largest number of wins, was awarded to the Avon Club.

The Terry Noonan Trophy for the rower or official showing commitment to rowing was awarded to Deb Hymers-Ross, Union, by previous recipient Maude O’Connell, Cromwell. 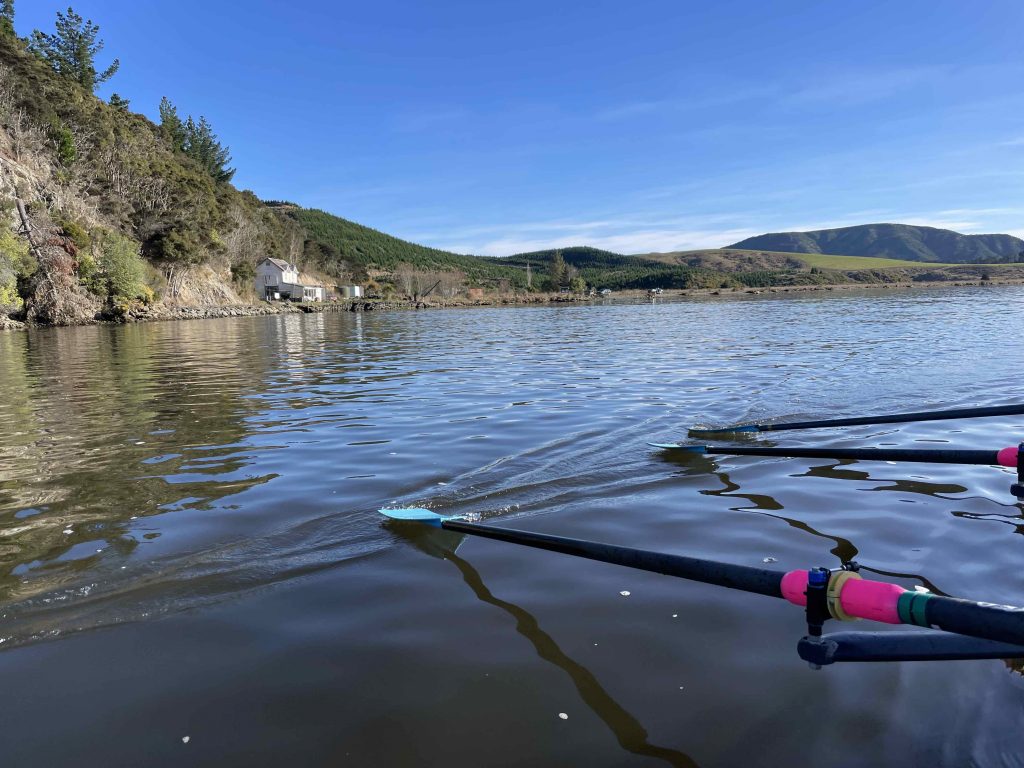 Oldest competitors were local legends Faye Forgie and Lorna Bain (both 76), Port Chalmers United, and John Wilson, (77), Riverton.  Lorna is a novice and teamed up with Ross Johnston (76 and also a novice). Rowing is a challenging sport to take up as we age, so kudos to these very couragous Port Chalmers rowers.

The weekend incorporated two social events – a barbeque along with Emerson’s product post-long distance and a dine and dance on Sunday evening.  Monday was a well-deserved rest day.

For many competitors the weekend was nostalgic as they re-lived racing on Lake Waihola in the seventies and eighties, before the creation of Lake Ruataniwha.  As many commented, racing at Waihola is hit-and-miss as the lake is exposed to the southerly, how lucky we were.

Ruataniwha put on a great show for the New Zealand Masters Rowing Championships 2021. With a rain and cool first day on Friday followed by two stunning days with great flat water for the side by side racing and Sunday brought some wind with the sunshine for the long distance race.

Reports from competitors emphasised that the racing was “as good as ever” despite many people missing the competition due to the Waikato and Auckland provincial lockdowns meaning few clubs were present from north of Taupo.

The mood on the bank was positive nonetheless and the covid safe arrangements worked well. All competitors had lanyards identifying which part of the bank was their “zone”. In the zone you could get on the water and hang out with other athletes – but no mixing between zones was allowed.

On the lake Lane 1 was used for launching and passing and the racing lanes were moved over from Lane 2 out to Lane 9. Peter Midgeley and the team from South Island Rowing did a fantastic job to set up and run the regatta and there were many congratulations heard from participants on this score. South Island Rowing really “pulled the stops out” to make the regatta work aided by competitors and supporters who were really compliant.

A few photos from the long distance race. 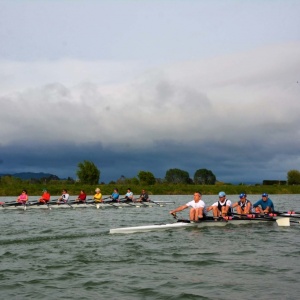