Ruataniwha put on a great show for the New Zealand Masters Rowing Championships 2021. With a rain and cool first day on Friday followed by two stunning days with great flat water for the side by side racing and Sunday brought some wind with the sunshine for the long distance race.

Reports from competitors emphasised that the racing was “as good as ever” despite many people missing the competition due to the Waikato and Auckland provincial lockdowns meaning few clubs were present from north of Taupo.

The mood on the bank was positive nonetheless and the covid safe arrangements worked well. All competitors had lanyards identifying which part of the bank was their “zone”. In the zone you could get on the water and hang out with other athletes – but no mixing between zones was allowed.

On the lake Lane 1 was used for launching and passing and the racing lanes were moved over from Lane 2 out to Lane 9. Peter Midgeley and the team from South Island Rowing did a fantastic job to set up and run the regatta and there were many congratulations heard from participants on this score. South Island Rowing really “pulled the stops out” to make the regatta work aided by competitors and supporters who were really compliant.

A few photos from the long distance race. 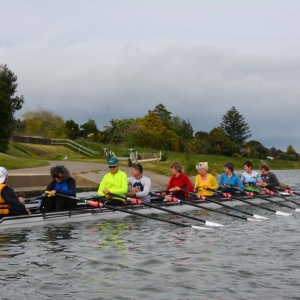