You might have noticed in last month’s newsletter a photograph of me with my new friends from Piermont Rowing Club on the Hudson River in New York. Rebecca has prevailed on me to write a bit more about my experience.

We have family – including a grand daughter – who have lived in New York City for some years, so we have become regular visitors. Over the years made some rowing friends associated with the Traditional Small Craft Association in Connecticut. One summer with my friend Bill from there I rowed the Blackburn Challenge, a 26 mile ocean race around Cape Ann in Massachusetts, in a fixed seat double. Another summer he and I built a fixed seat single, then (with another boat) did a rowing camping cruise in the Adirondack Mountains, Saint Lawrence River, and Lake Champlain. Good times.

Now I’m a Masters rower. On previous trips I have contacted clubs directly to ask if they host guest rowers, with little success. This time I posted on Masters Rowing International Facebook group where I got half a dozen replies and discovered, curiously, that very little rowing occurs in New York City. It was people from clubs in Pennsylvania, New Jersey and New York who responded.

Converting a response into an outing proved to be something of a challenge. Partly because my plans depended on friends and family’s plans; partly because rowing clubs are often hard to get to. They can be out of the way and not close to public transport, and rowing tends to happen early in the day, or late. Lacking local knowledge and a car it was hard to work out how to get there.

Two people came to the rescue. The first was Bill who now lives in Delaware. He drove me 30 minutes to the Wilmington Rowing Center, just across the border in Pennsylvania. He generously (and patiently) waited through the two-hour process of going for a row in one of three eights. The second was my new friend Vince from the Piermont Rowing Club who told me the easy way to travel by train, then he drove across the Hudson to Tarrytown to meet me, and dropped me back at the end. 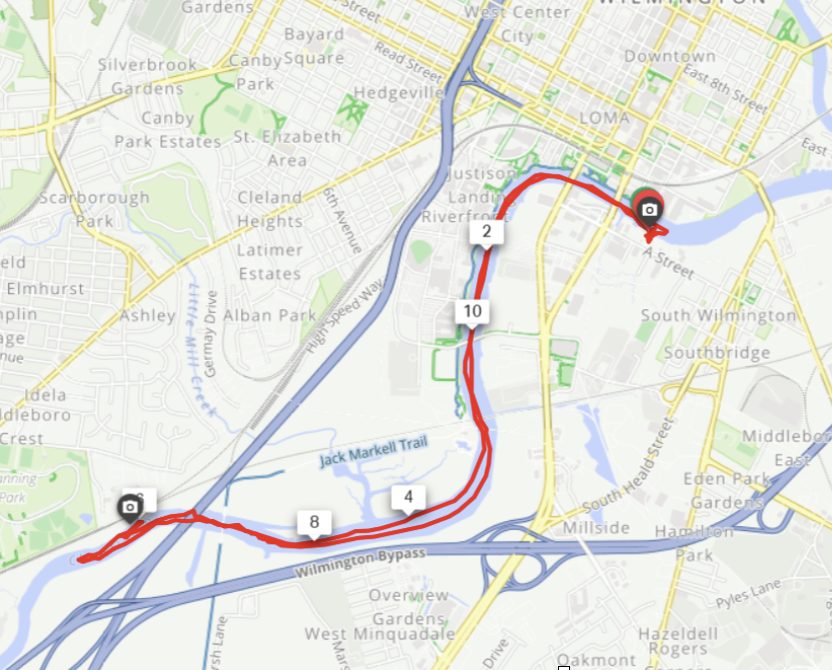 I learned this about being a host: somebody at the host club needs to be persistent, responsive, and helpful. At Wilmington it was Karen Walsh who responded enthusiastically, offered opportunities and made it happen; Vince performed same role at Piermont, in addition to the taxi service.  It made me think about how we can better host visiting rowers who come to Petone Rowing Club.

Being around different rowing clubs is always interesting, more so when they are in a different country. Both the clubs I visited were Masters clubs, and at Wilmington they ran two school programs as revenue earners. People with whom I rowed were at various places around the middle of the continuum between dedicated racer and enthusiastic explorer.  At both clubs the people were lovely, enthusiastic and welcoming. Also curious about rowing in New Zealand and surprised that we row all year.  Both clubs use the terms ‘port’ and ’starboard’, which is a long-term boatie, makes more sense than the terms we commonly use.  At Piermont were delighted to note that, in common with Petone PC, their initials are PRC and colour is fluoro yellow.  A difference is that they eliminate the issues of looking after an elderly boathouse by not having one!

It was also great to row on different (and famous) water. The Christiania River at Wilmington wound for 10 km through the city and beyond, starting amongst derelict factories and railway bridges, ending in some marvellous marsh country with birdlife on one side, Interstate on the other.  The Hudson River is 3 miles across with the Mario Cuomo bridge dominating the scene, it is tidal, and as someone pointed out, has been used for navigation for maybe 10,000 years.

I’m wondering how many other New Zealand Masters rowers have had experiences of rowing informally and other countries. It would be great to hear some more stories in this newsletter. 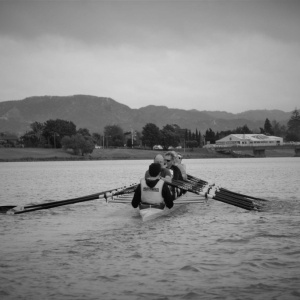