St George’s Rowing Club was the host for a masters sweep camp organised by Christine Hobbs. Focusing on sweep rowing, the camp was open to only 16 athletes plus 3 coxswains. The host club took the opportunity to invite club coaches to join in to watch and learn as well.

Christine’s vision was a focused camp over a weekend just to work on technique in mixed eights. She was not disappointed.

The legion assisted with organisation know-how, introduction to a suitable coach, pricing and publicity.

Having sent one newsletter announcing the camp to Legion members, it filled up in 3 days – with a waiting list.

It was the best coaching I’ve had in my life. Raf is truly good at coaching masters. Understanding what it takes to move a boat in sweep oars. We did 2 sessions on the water each day Saturday and Sunday and a group dinner Saturday night. A terrific way of building relationships across the clubs.

The coaching was exception – you could do it 3-4 times in Auckland. Christine had double the of number of enquiries afterwards from people who’d missed out.

Legion of Rowers would like to support more masters camps – if your club would like to host, please get in touch. Our ideal is to hold one in each province each year.

Masters sweep eight on the Tamaki 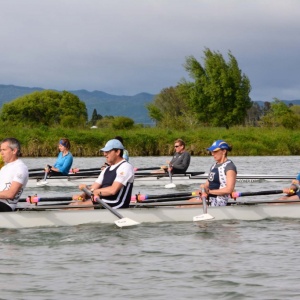