I just wanted to send you a little bit of a paragraph to let you know how my time went in the Czech republic and thank you once again for your sponsorship!

My time in Prague started on the 31st of July, when we touched down after a very long, but thankfully uneventful flight. From here, we went straight to the hotel to check in and get changed for training that same afternoon. The bus ride out to the lake everyday was about 40 minutes but our buses were quite nice so it wasn’t bad. For the next week and a half we trained twice a day, just getting used to the atmosphere and our new boat.

By the time the 8th rolled around and the Junior world champs started our squad was well adjusted and ready to attack the next 5 days of racing. Our first race was a quite a competitive one as we came up against Great Britain and America. Two powerhouses of rowing, but we were well prepared and it was good to get a feel of how competitive the field was. USA and Great Britain shot out early but we kept our composure and reeled USA back in by about the 1k to finish second behind Great Britain, who we always knew would be a class crew with 2 of their 4 returning champions from last year.

Onto the Semi’s 2 days later where we were up against the home favourites Czech Republic. The semi’s were a big day because we knew that crews will do anything to make the A final and only 3 spots were available. As expected Czech republic flew out of the gates fast and it took us a little while to catch them but by about the 1500m mark we were even with them to take the win by just over half a length. Onto the A final and the nerves were starting to build up but our boys did well to hold them down. We learnt from our previous races and decided to give it a bit more at the start in an effort to keep a hold of the very starting Italian crew. This plan worked as we were still in touch with Italy and equal with Great Britain coming through the first 250. From here we executed our race plan perfectly putting us in a good position coming down to the last 500. In the last 500 we wound the rating up to pull away from Italy and finish 2nd place behind a very good Great Britain crew.

From here, I plan to row for waikato RPC and hopefully try make the U23 squad next year before heading over to a university in the states to continue my studies.

Once again I would like to thank you for your contribution because without it I would not have been able to have the experiences I have had. 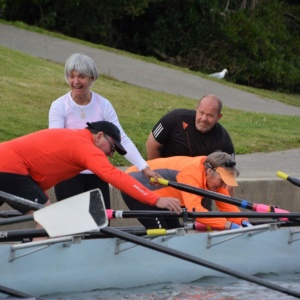