The junior rowing campaign has come to an end for 2018 as of yesterday after we finished racing. I am currently emailing from Prague airport as we await our flight to come home.
Build up to racing:
we arrived in Prague on the 30th of July at 2pm where we then settled into the hotel and checked out the rowing venue.
as we exited the airport in Prague, the temperature struck us, 37 degrees was not nice to start with.
We settled in well the first few day, acclimatising and setting up our new boat. 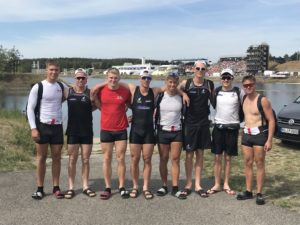 on the third day of being in Prague a sickness struck our team. approximately 7 rowers out of the 20 plus my coach were faced with a vomiting bug (I was lucky enough to dodge it). This lasted 24 hours but the athletes had to give another 24 hours to recover. once the one crew member of my boat had overcome his illness we got stuck back into training, working on the little things in preparation for the champs. we were forced to train without our coach for around 2 days as he was too ill but we soon got back into our normal routine by around the Friday/saturday of being in Prague ( we arrived on a Monday).

week of racing:
We started racing on the Thursday of the second week. in the build up to this we kept training twice a day until Thursday doing smaller sessions to allow our bodies to recover for the racing ahead. we travel 40 minutes to the lake each morning around 7am and then come back to the hotel for lunch, have a nap and then we would travel back to the rowing venue to train again in the afternoon. Adjusting to the food in Prague was difficult at first but we soon become immune.
Junior World Rowing Championships: 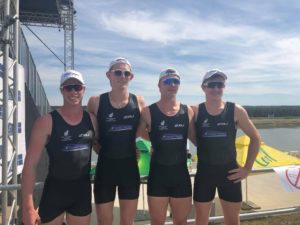 our first race was on Thursday. the temperature was not nice to us ( around 33 degrees). whilst warming up we had ice towels all over us to stop our bodies from overheating before we get on water to race. In the heat we were up against the remaining world championships Switzerland. we lead until the very end where they just moved in front of us taking the win by .5 of a second and both of us progressed to the A/B semis. we were lucky enough to avoid the repechage and have a day off on Friday to recover. Saturday was one of the most toughest days I have faced yet. the A/B semis. first 3 crews out of 6 in each semi would go through to the A final, the rest would go into the B final. The sun was out but the strong tail wind breeze soon cooled us off. we knew the conditions were going to be tough. we were up against the remaining second place champions Great Britain as well as Denmark (world record holders), Poland, Romania and Croatia. we approached 500 metres into the race where one of the guys in my crew caught  a huge crab ( crab in rowing means you catch your oar in the water which is a struggle to get out who the boat is moving. this was when disaster struck. we recovered and held second place. until another 300 metres where it happened again. we lost form and once again an oar was caught in the water. we were running on adrenaline but it was not enough to get us in the top 3 places to make the A final as we had lost too much boat speed. This was a heartbreaking moment for us. Anger, tears and grieving occurred. After getting back to our hotel we gathered back as a crew and spoke about it to learn off what happened and then move on. We slept on it and the next day we prepared to race in the B final. For us, this was about proving ourselves and what could have been. We raced to our limits and displayed a good attitude towards the B final and came away with the win in this race. This was a very good learning curve in the sport that we will take away and improve.
By comparing our B final race time to the A final, the crew and I would have been up in amongst the medals. however, this does not phase us as we took away good things from the B final and made awesome friends from other countries.
This experience had its ups and downs and as we were training back home in NZ with the goal of making the podium we were not the happiest crew in amongst the field.
from here on in, I will take a few weeks off to spend time completing school work and take my mind away from rowing for a while. My goal is to make the NZ Junior rowing team again whilst completing another season of rowing for Waikato RPC/ Club over the summer. long term, I want to move up the grades in the NZ rowing system ( juniors – under 23’s – elites ).
once again,
Thank you so much,
Will Thompson 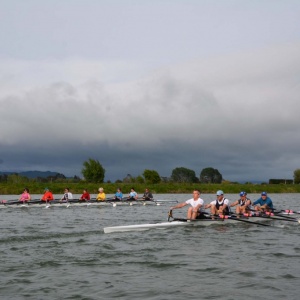