There are only three words to describe the 2018 World Masters Rowing Champs in Sarasota, Florida, USA: HOT – HOT – HOT! The Florida weatherman could give us no respite from the 35°C temps, on average, for the entire week. We were thankful, however, as there were no threats from any hurricanes moving in from the Atlantic Ocean. What was most amusing, yet very serious, was that our safety briefings included ‘alligator awareness safety’ on a daily basis! Spectacular thunderstorms would build each late afternoon/evening providing a lightning display to rival anything that we had ever seen before. 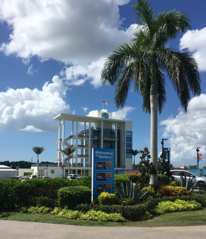 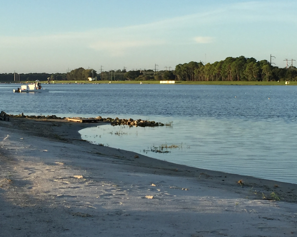 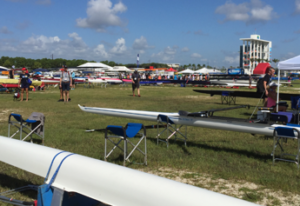 The Sarasota 2018 World Masters Rowing Championships were not as well attended as those in 2017 in Bled, Slovenia, but the calibre was just as good, i.e. we saw lots of very, very FAST times on the water. The word on the street was that many rowers, especially the Europeans, were worried about the potential hurricane threat, so most of those rowers attended the European Champs in Munich in July, 2018 instead of making it to Florida.

So who are ‘WE’? This year, New Zealand was represented by Martha and Caroline DeLong, a mother and daughter team from The Auckland Rowing Club. Yes, just the two of us, but hopefully ‘we done did ya proud’! Caroline, in her single scull, led from start to finish, holding off a challenge in the last 250m, to win a gold in the A1x, and old lady Martha joined a Masters International WE8+ which moved from fourth to first before running out of water to earn a gold also only to have ‘7-Seat’ pulled (rather spectacularly) from the boat for a drug test by the US Drug Enforcement Agency. However, due to the extreme heat, it took this poor 7-seater 2.5 hours to provide a statistically representative sample! 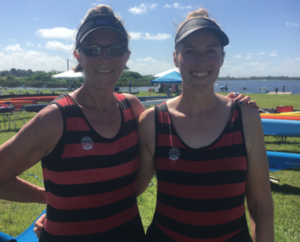 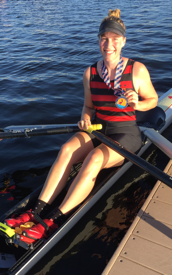 This World Masters event was the first for Caroline, having just made the ‘age grade’, while Mom Martha has attended several of these world events over the past few years (Varese, Munich, Hazewinkel, Copenhagen and Bled) with crews from London. In addition to our individual wins, Caroline and I raced a double together. Mom is not sure that Caroline will ever try that again as we had to row ‘C’ and after being late to the start and then a ‘quick start’ and with a winning boat time of 3:36, well, Caroline and I have some work to do!

Two thousand and thirty (2030) rowers registered for this 2018 championship event with over half of these coming from the continental United States (1308). Forty nine (49) countries were represented, including many from South America (just drive north). We are sure that no one in NZ would be surprised to learn the CHINOOK took both the men’s and women’s points trophies (yes, Chinook of WMGs fame!). The event was very well run, and we take our ‘hats off’ to the organizers!

It was a great experience. We look forward to Hungary! 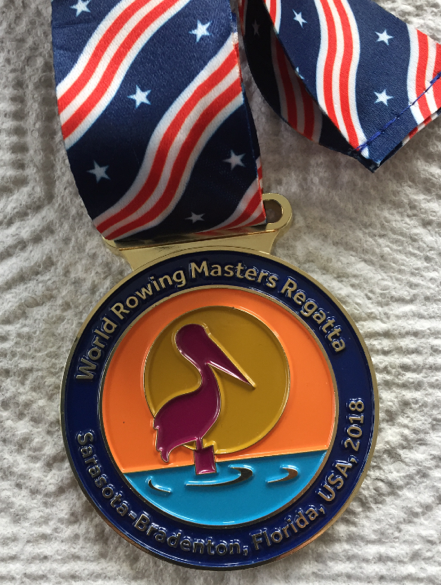 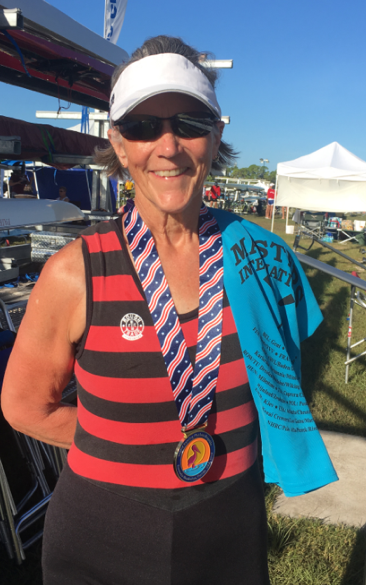